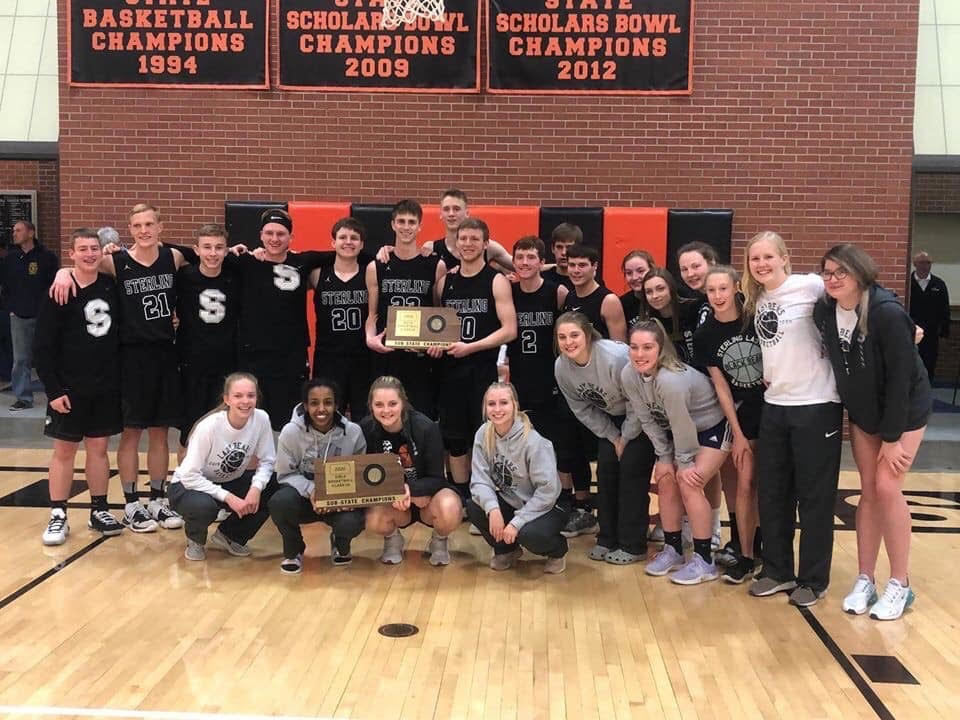 On Saturday, March 7, 2020, the community of Sterling watched as both SHS basketball squads, the Lady Bears and Black Bears, earned their right to compete in the 2A State Championships.  The state tournament will be hosted in Bramlage Coliseum, on the campus of Kansas State University. What truly makes this trip a special one is that this will be the first time that both teams compete at state in the same year.

To get an unforgettable evening started, the Lady Bears faced Hutchinson Trinity-Catholic, one of their HOA league rivals. The girls competed hard and took on the challenge of defeating a team for the third time in the same season.  Ultimately, the Lady Bears won 62-44 earning their second consecutive trip to the 2A State Tournament and possibly another opportunity to play for the state title. “We are so excited to have the opportunity to return to the state tournament.  It is unbelievably hard to get there and consider it a real blessing to get to go.  We obviously hope to put a run of good games together and make it back to that championship game.  It will be a great experience for our community having both teams in Manhattan! Go Bears!” said Coach Rowland when asked to reflect on this experience.

With the victory, the Lady Bears earned the #3 seed and will open the tournament on Wednesday, March 11, at 4:45 pm, facing #6 seed Garden Plain.  This will be a rematch of last year’s 2A State Championship game in Hays. With a win, Sterling would then play on Friday at 3 pm against either WaKeeney-Trego Community or Bennington. To review the entire girl’s bracket, click here

In Saturday night’s final, the Black Bears were just off of an emotional win over the Hutchinson Trinity-Catholic squad that recently beat them in a rematch following the Sterling Invitational championship game.  The Bears won that game 41-30, thus, setting up a matchup with the #1 seed Ellinwood Eagles. With gutsy play, the Black Bears defeated Ellinwood 43-37 sending them to Manhattan along with the Lady Bears. Coach Schneider reflected on this victory by sharing, “I'm so proud of our guys for their toughness throughout the season. We had a great resolve to reach this position, and I am impressed with the focus of our guys. I am so happy for Coach Rowland and the girl’s team as well, as they continue their tremendous program success. It's going to be a fun week, and a great week to be a Black Bear!”

The Black Bears will tip-off on Thursday at 4:45 pm as the #5 seed.  They will face #4 Erie who won the Yates Center regional defeating Arma-Northeast 65-44.  With another victory, the Bears would face the winner between #1 Pratt-Skyline and #8 Hillsboro on Friday at 4:45 pm. For those looking to check out the boy’s bracket, click here.

For those of you planning on driving up and not familiar with the location of the Bramlage Auditorium, here is a map to help guide you.  Ticket prices at the door will be $6 for K-12 and $9 for adults. The price is increased by $1 to meet KSU’s facility use fee. Also, KSU may have a clear bag policy in place.  So, be prepared for a bag inspection.

Those unable to attend the games, can watch the quarter final games on the 3BN Network. The semi-final and championship games will be live streamed by KSHSAA on the NFHS Network.  There will be archives of all the games available on 3BN upon completion of the tournament.

We wish both SHS teams and coaches the best of luck and that the Black Bear Nation travel safely to and from Manhattan.  See you all in Bramlage!